Where there is smoke, there is usually fire.

The court of public opinion is a mighty one and it has ruled:  the curtain is closing on Bill Cosby.

The 77-year old comedian is facing allegations of sexual assaulting more than a dozen women since the 1960s.  Already, 15 women have accused Cosby of fondling, drugging, sexually assaulting or raping them.  As a result, NBC has canceled a new sitcom, Netflix postponed plans for a comedy special, and TV Land has pulled “The Cosby Show” reruns from its lineup.

The silence is so loud…

As I examine this situation, I wear two hats.  I am a sexual assault survivor and a public relations strategist.  As a public relations counselor, I believe Cosby’s crisis pr team could have forecasted this years ago and prepared proactively for the tsunami they are facing now.   If the allegations are untrue, Cosby should have come out swinging.  Instead, his unwillingness to engage sends the message that he is guilty or has something to hide.

As a survivor of sexual assault, I know how difficult it is for victims to speak up.  A lot of people have been questioning, “Why are these women just now coming forward?”   “They just want a settlement against this rich man and get media attention!”   Cosby’s attorney Martin Singer states,  “The new, never-before-heard claims from women who have come forward in the past two weeks with unsubstantiated, fantastical stories about things they say occurred 30, 40 or even 50 years ago have escalated far past the point of absurdity.  When will it end?”

In my own life, it took me 20 years to find the courage to write about my sexual assault.  For two decades, I literally feared the man who attacked me would track me down and kill me.

And I certainly didn’t write my book for attention, for recognition, or to become famous.  I wrote it so I could heal.

The bottom line for rape survivors:  no woman wants this kind of fame. 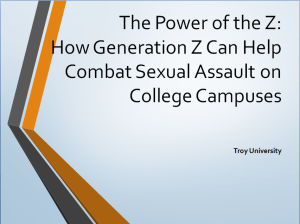 A New York Times article this week recounted how an 18-year-old freshman reported her rape and regretted doing so after Hobart and William Smith Colleges held her disciplinary hearing.  According to the New York Times article, “panelists interrupted her answers, at times misrepresented evidence and asked about a campus-police report she had not seen. The hearing proceeded before her rape-kit results were known, and the medical records indicating trauma were not shown to two of the three panel members.”

The main takeaway from this is that first responders, law enforcement officers, and officials from Higher Education can re-traumatize the sexual assault victim.

I know a great deal about this because, after my sexual assault at an Atlanta hotel in 1990, security officials created secondary victimization for me by escorting me to security offices of the hotel and placing me just feet from a man they believed was the perpetrator.  I realized instantly they had apprehended the wrong man, but in that split second, the man lunged toward me and violently screamed at me, “You [email protected]@#$ing bitch, I didn’t do this you!”  I was already traumatized from the robbery and sexual assault which had occurred in the hour before, but this secondary victimization was absolutely absurd and should have never taken place.

In the opinion of the freshman student, the three panelists did the same to her.

Senator Claire McCaskill, a Missouri Democrat who has investigated the quality of campus rape investigations. recently surveyed 440 colleges and universities and found that one-third had failed to properly train officials adjudicating claims.

While the national debate continues over how best to stop sexual assaults on campuses, we must also roll up our sleeves and start educating higher education officials on how to prevent secondary trauma.  I plan to speak on this subject next month at the Police Officers Association of Georgia.  Stay tuned…

As summer vacations continue, many women will travel abroad, book family trips and plan girls’ weekends for much needed R and  R.  Others will simply be traveling for work which they do year-round.

No matter if your plans are for business or pleasure, it’s always important to stay safe when traveling in a new place.  According to many hotel managers I have interviewed since 2010, the safest hotel floors are between 2 and 6.  The first floor is not a good choice because perpetrators can easily access this floor.  In addition, if you get too high in the 20s and up, you have to spend an inordinate amount of time in an elevator which can make you vulnerable as a single traveler. Therefore, the lower levels are a good choice, especially in case of a fire…most fire departments’ ladders reach to the 6th floor!  Jenny Lynn Anderson  offers 10 tips when checking into a hotel.

Visit Jenny Lynn Anderson’s website at www.jennylynnanderson.com. “Room 939: 15 Minutes of Horror, 20 Years of Healing” can be purchased through her website, on amazon.com and barnesandnoble.com.

There’s a cool “Cuff” that’s hitting the market this fall and every woman who worries about safety should own one of these bracelets or necklaces.  Here’s the lowdown…

The inventor is Deepa Sood, a former VP of product development at Restoration Hardware, who had an “aha” moment one night while out with her husband and friends.   “We had a dinner party during which, over many glasses of Pinot, my husband and some of his friends were geeking out over the Nike + Fuelband and some design friends and I were trying to stack the band in between our other jewelry to make it fit more into our looks. It was a battle of the bands! The next morning, I found myself wondering—why does all this cool functionality have to be relegated to one aesthetic vision.”

The result?  Bracelets, necklaces and key chains in the Cuff line ($35 to $150)  that serve as a personal alert system.  CuffLinc, the brand’s innovative technology, is a small device embedded into the accessories that connects to your smartphone and sends alerts to your trusted network when you sense you are in a vulnerable or threatening situation.

Here’s how it works: Download the app and designate family and friends to receive alerts in case you sense danger. A subtle touch of the wrist or neck will ping everyone in your network and identify your location via GPS, and it won’t stop until someone responds.

High tech.  Beautiful.  Stylish.  Smart.  Who can resist?  The Cuff collection is available for preorder now, with delivery schedule this fall.

Growing up, my mother gave me advice that literally saved my life.  She told me and my sister, Janna, that if we EVER were attacked by a man, then do everything in our power to survive.  She told us to kick, scream, run fast as we could…do whatever it took to get away.
And I did on November 28, 1990 when I survived a brutal sexual assault.
The reason I’m still here today is because I fought like a girl!  Let’s champion girls’ confidence and keep this conversation going.